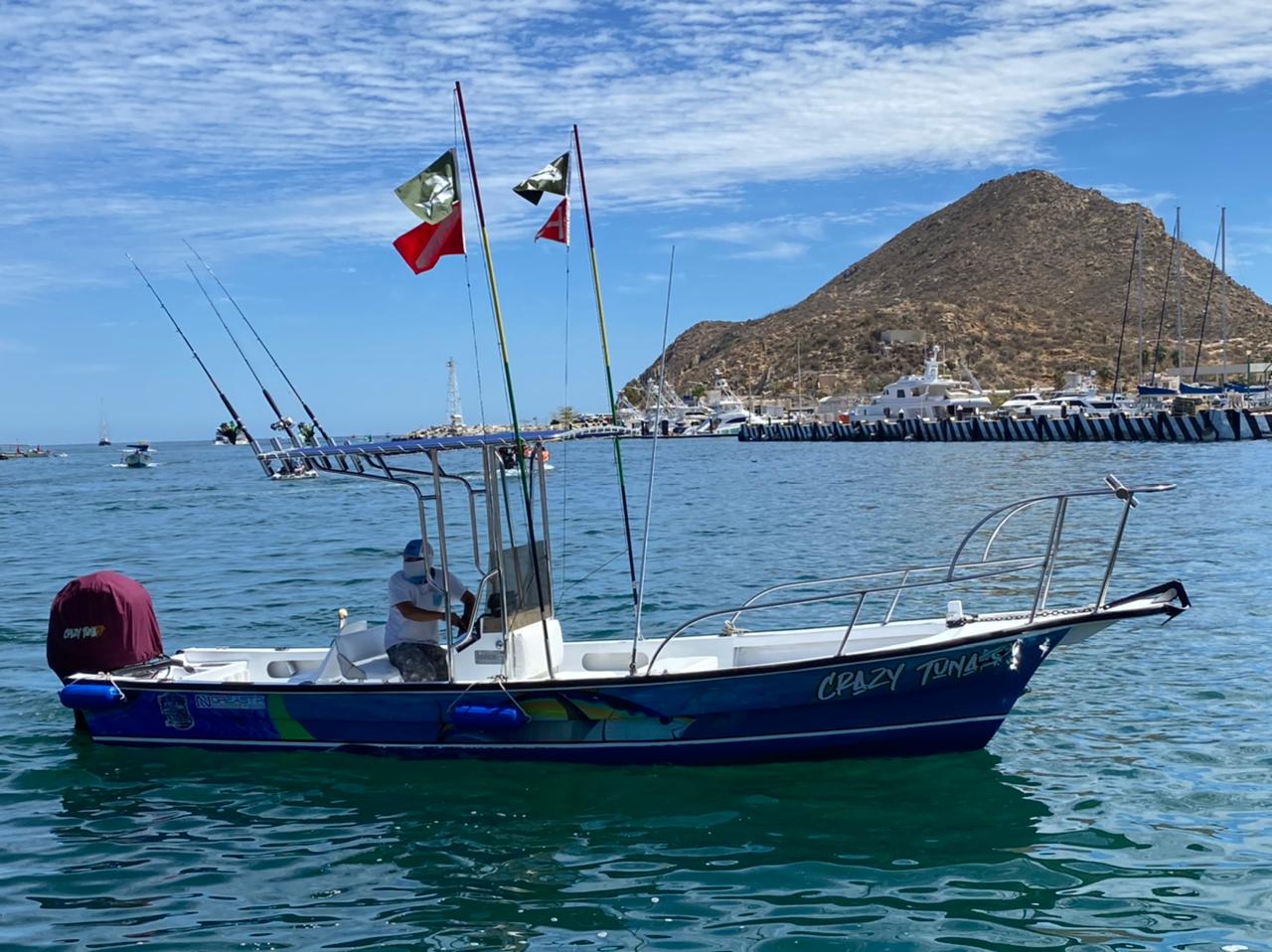 Being on the water is one of Marie's favorite things- catching fish, crabs, and catching some sun is always a great day. Marie been fishing since she was a little kid. Marie's grandfather taught her the ways around the ocean. She loves to fish for seabass and fluke with her very own personalized pink rod and avet real. Fishing can we tricky and she's always up for the challenge. Marie has been a part of the fish monger crew for almost 6 years.

Captain Joe DeGruttola is a US Coast Guard Licensed Captain with an OUPV Near Coastal to 100 Miles offshore certificate. He has been fishing and running boats from the Raritan Bay for the past 15 years and has fished for all species of fish from inshore to offshore. Joe has also participated in many tournaments that include Monster Shark, Mako Mania, White Marlin Open, Mid-Atlantic 500, Mid-Atlantic Rockfish Shootout, and many other striped bass tournaments on the ASA Striper Trail. Captain Joe is affiliated with companies which include Keepin' It Reel, H2o Lures, Seaguar, Avet Reels, and Sting-o Fish.

Captain Dustin Strehl started fishing at a young age. He grew up in Port Monmouth, NJ and fished down at the Belford Co-op with his life long friend, Johnny Adubato on Johnny's dad's boat, the "Johnny Boy." Dustin got his boating license and first boat at the age of 13 and fished the local waters. At the age of 16 he got his first job as a commercial fisherman on his neighbor's bunker boat. It was then he realized his passion for fishing. He has worked on many boats and fished a lot of tournaments up and down the East Coast, including the ASA, American Striper Association, where he learned many different techniques on fishing for striped bass. Dustin worked as a Mate on Fins on Feathers Charters out of Leonardo, NJ for 4 years. In November 2016, Dustin caught the Fish of a Lifetime, a 22.5 lb Tog. He now holds the IGFA line class World Record for 20 lb test line.

Dustin took the Captain's exam and decided to start his own Charter Boat Fishing business. He bought a boat in 2017 and now owns Sea Beast Sport Fishing Charters out of Leonardo, NJ. The Sea Beast is a 33 foot Bertram, with twin diesel engines. He will be fishing for all species of fish, inshore and offshore, including fluke, sea bass, striped bass, blackfish, ling, cod, winter flounder, shark, tuna, and tile. He runs Open Boats and 6 Man Charters. To book your spot, please contact Captain Dustin Strehl at 908-601-4828 or like us on Facebook, Sea Beast Sport Fishing Charters.

Derek is not only a Captain but an avid fisherman. Derek has always had a passion for the water and an instinct for landing fish. From winter flounder in the rivers and bay, to live lining adult bunker for trophy striped bass, to jigging in the canyons for bluefin and yellowfins, Derek makes the most of his time on the water looking for trophy fish for his clients and himself. He has personally landed 5 striped bass over 50 pounds and 8 doormat fluke over 10 pounds. Derek continues to have the driving ambition to look for bigger and better fish, mixing new techniques with old reliable ones.

Captain Kris Black has over 20 years of fishing New Jersey's inshore waters. That's most of his life. Putting fish on the deck is what he lives for and he'll do whatever it takes. If you have fished with him, you already know, he knows where to find the fish. The amount of business, regular customers, pictures and fishing reports of record catches that he has produced over the years, speaks for itself.

Specifically Bottom Fishing for Fluke, Seabass, Ling, Porgies and Blackfish, also targeting Striped Bass and Blues. Capt Kris is an EXPERT live bait fisherman for Stripers. Captain Kris holds a 50 ton Masters U.S.C.G. License. He is a career fisherman, not part time or "side job to cover costs" running the boat full time, 7 days a week and his reputation is ALWAYS on the line.

GypSea Fishing Charters is located out of Seaway Marina in Rockaway Beach. Capt. Josh has fished all over the island in search of trophy catches. His dedication and drive in putting customers over fish is what keeps them coming back.

At 42 Tony Maja Jr has been fishing as long as he can walk. Growing up with a Striped Bass Trolling Innovator Tony Maja Sr. As a dad. Tony Jr. has been fishing since the age of 8 and has 4 Striped Bass over 50 pounds under his belt. He worked closely with his dad to perfect the Art of Bunker Spoon trolling for trophy Striped Bass. He now has taken the Reins of the Business and trying to keep what his father built going strong.

Steve and Jill have been fishing together for over 20 years, having spent the majority of that time in Montauk. They started NOVEMBER RAIN CHARTERS in 2003 with their 28' BHM. Shortly thereafter, they purchased the next NOVEMBER RAIN, a 35' Young Brothers, which they fished for over 10 years. Currently, they run their custom built 43' Lowell, one of Montauk's few USCG-certified multi-passenger charter boats. They can accommodate groups of up to 20 people and offer full and half day trips, along with non-fishing cruises.

The boat is equipped with bench and booth seating, A/C & heat, satellite TV and radio, a galley, and a clean topside head (restroom).

The NOVEMBER RAIN sails 7 days a week all season long from Westlake Marina, in Montauk.

This is a true passion for both Steve and Jill, who spend as much time as possible on the water. They love fishing and have spent over 15 years building their business and reputation. Every trip will include at least one of them on the boat to ensure the very best experience for their charter.

Serena Melville is a hardworking local gal from the small town of Seward, Alaska. She fell in love with fishing at a young age, due to her father being a long time commercial fisherman. She has been working on boats since she was 13. Serena has a vast knowledge of the local water and fishing. She has put her 100ton licesnse to good use, by putting people all over the world on fish and showing them a upbeat positive attitude no matter what, making it a great day out on the water.

Captain Jeff developed his love for the sea at a young age while fishing and crabbing the waters of Barnegat Bay, New Jersey. As he grew older he began fishing the offshore waters of the New Jersey coast. Captain Jeff followed his passion for the sea to the Florida Institute Technology where he studied marine science and earned a degree in offshore marine technology.

Captain Jeff lived aboard his first boat the "Blue Heron" a 41' trawler, for five years. He spent much of his time fishing, lobstering and exploring the outer islands of the Bahamas and Florida Keys.

Captain Jeff has owned and operated the "Lady Helen" a 29' twin diesel charter boat over the past 26 years. Fishing out of Fort Lauderdale, he has been providing an exciting and memorable charter fishing experience for his clients. He currently holds a 100 ton U.S. Coast Guard Masters License, and is fully licensed and insured for charter fishing.

Captain Dave Allen was born and raised in Fort Lauderdale. Here is where his love for the ocean began, never knowing it would lead him to pursue a career as an angler one day. Growing up as a child he took family trips to islamorda in the florida keys on a regular for lobster mini season and spear fishing. Captain dave works on the Lady Helen as a first mate. Working and Learning from captain Jeff who has 30 years of experience in charter sport fishing together they take customers out of fort lauderdale to catch Sailfish, Mahi, wahoo, tuna, kingfish and many more species...

The El Nino Saltwater Fishing Team is based in Southern NJ. They are a group of seasoned anglers with collectively over 40 years' experience on the water predominately growing up fishing around the waters off Wildwood, Cape May, and Delaware Bay . They fish all facets of saltwater from the back bays to 100 miles offshore. Including many tournaments and a grueling schedule of recreational trips. The team is on the water 10-11 months out of the year as many days that conditions allow. For their team a hobby has turned into a passion that they will keep pursuing for a long time.

The traditional recreational fishermen keeps their boat in a slip for the season or trailers to their local waters. Every year the ELNino a (2320 Parker Pilothouse) stays on the trailer and they tow it to some of the most desirable places to fish on the East Coast. During their season they travel to most common coastal areas from Ocean City Maryland to Raritan Bay, Long Island, and Montauk New York selectively strategizing where the best place fish week to week. Doing so they have established a vast combination of exposure and great relationships with fishermen, charter captains, tackle shops, and tournament directors all throughout the fishing communities. The relationships, the memories, the laughs along the way is what keeps them living the dream.

Bobby Tambascio - Founder and Captain - found his calling at a young age. With his high level of energy and love for the sport he has always been one to excite others and catch fish. Bobby has first-hand knowledge of local waters, and is especially skilled at getting fish on the line. When seen out on the water most may say: Yesss Bob!

Bobby holds a near coastal 100-ton Masters Captains License. He has also worked within the marine departments of various Yacht Clubs and has been a private fishing guide to local boaters for several summer seasons.

Create an account with us and you'll be able to:

Fill in your email below to request a new password. An email will be sent to the address below containing a link to verify your email address.